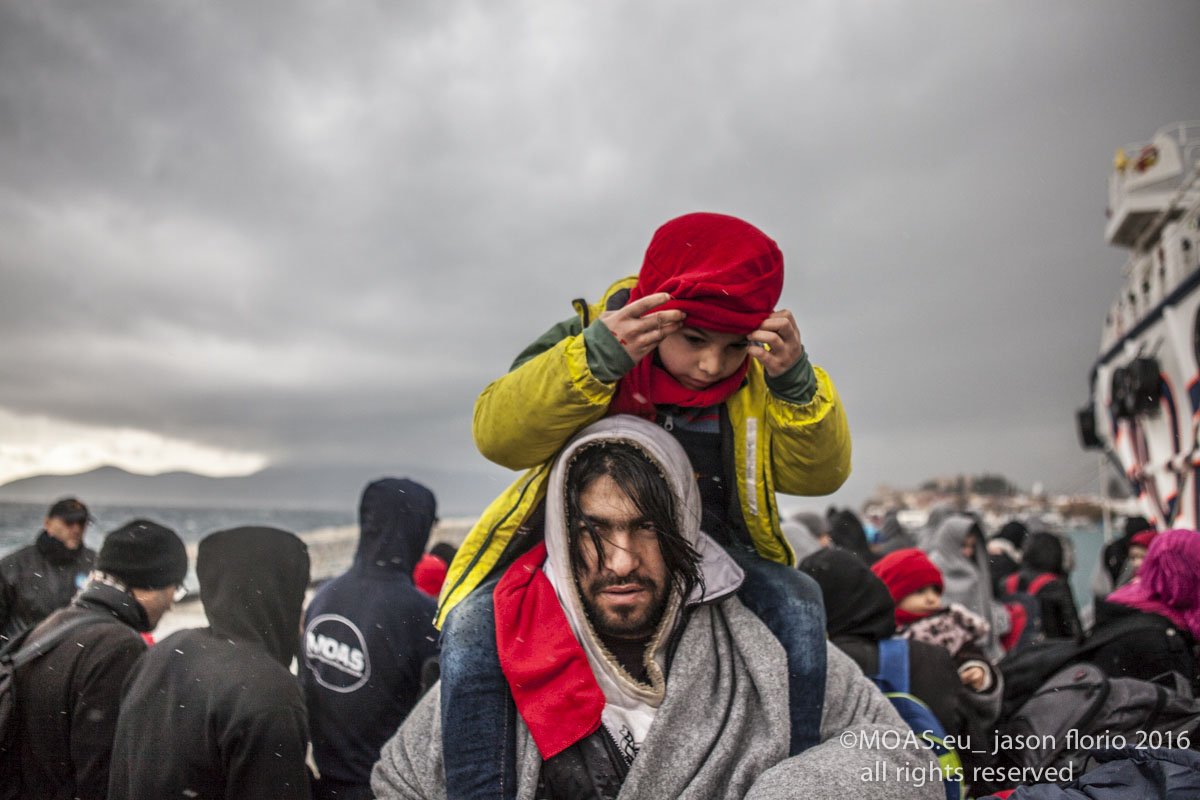 50 million and counting. That’s how many people are moving around the world. This is a catastrophe and it’s not just in the Mediterranean. It’s in Southeast Asia, it’s in the Aegean, it’s in Australia, the Caribbean. It’s everywhere. You build walls, people will tunnel under them. Block the tunnels; they’ll go to the sea. You can’t stop the movement of people. Right now, we are facing an exodus in the world.

Many are escaping war. Right now at least 40 countries are in a state of violent conflict.

But many others have lost their homes due to climate change: desertification and rising waters are devouring land.

Ironically, the globalisation that lines Western pockets and relies on a cheap remote labour force doesn’t go both ways. Foreign-funded plantation expansion and giant construction and mining projects that poison the land, air and water are forcing people from their homes.

And yet we use one word to describe 50 million people who, for whatever reason, can’t stay home: ‘migrants.’

As humans, we need to come up with some better words to describe the largest migration since the end of the Second World War.

The sociologist Saskia Sassen and I talked about it in a Foreign Policy Global Thinker podcast in December.

Dr Sassen: ‘I think we’re still using this language of ‘migrants’ and ‘refugees.’ But to a very large extent, what I think we’re actually seeing is the beginning of a new history…This is not migration as we know it. This is something else.’

In a Guardian article, Dr Sassen wrote: ‘Overseas land acquisitions are rising, with people pushed off their land and into poverty; let’s not pretend that’s migration.’

In theory, words like ‘migrant’ ‘immigrant’ ‘refugee’ merely describe legal status within a country. But what colour is an expat?

Dr Sassen: ‘This is a new history, and it deserves a new kind of language…We have to map all the diverse dynamics at work in producing massive displacements of people. It’s not only Syria and war.’

In today’s globalised world, we need to expand the definitions of people who have left behind home, language and culture. A new lexis will help us understand and empathise with the people who have survived terrible circumstances to make a new life in a strange place.

The late nineteenth century was in part defined by the rise of nationalism and the fracturing of empires along fault lines of language. A Polish oculist, caught in the crossfire between Poles, Jews, Germans and Russians, invented a language that he hoped everyone could learn and share quickly.

People, he reasoned, might not kill each other so much if they can talk to each other.

Though some say his utopian language didn’t stick, as many as 2 million people speak it today in 120 countries. Speakers the world over open their homes to travellers who want to learn the lingo. The language is called Esperanto: ‘one who hopes.’

The illusion of nationalism is just that. We live within a framework of what Dr Sassen calls Global Cities, sustained by worldwide financial and cultural links. That migrant you see might be displaced because the factory that made the shoes you’re wearing poisoned his well.

We need to find a way to let compassion be our global language, and welcome la esperantoj: ‘those who hope.’