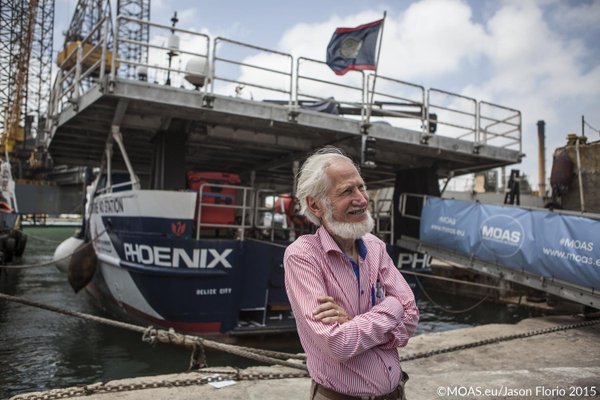 Dr Rupert Neudeck had a problem. It was 1979, and the Vietnamese refugee situation had reached crisis levels. Thousands of refugees were fleeing camps on small boats ill-suited for the open seas. Armed only with a few celebrity endorsements and connections as a German journalist, Dr Neudeck scraped together funding for a ship, the Cap Anamur, filled it with volunteer medical personnel and dispatched it to the South China Sea. The first ship was a floating hospital. Funded in bits and pieces by German citizens, Committee Cap Anamur vessels would treat 35,000 refugees.

Other ships rescued people from sinking boats and pirates. By the end of the refugee crisis, Cap Anamur rescue ships saved 11,300 lives.

The situation in Southeast Asia is still dire for migrants, this time the Rohingya. Like the Vietnamese boat people of 35 years ago, many are escaping squalid refugee camps in small unseaworthy vessels.

I was lucky enough to meet Dr Neudeck when he visited MOAS in June 2015. He remains dedicated to humanitarian causes.

‘MOAS is the example of the European decision to save lives,’ he told me, aboard the Phoenix that day. ‘[It’s] the example that we can do it…We should all join this example of life-saving.’

Was the Cap Anamur boat rescue a success? Dr Neudeck remains philosophical about binary definitions when talking about saving lives.

In a 2015 Vietnamese Refugee Archive interview he said: ‘We could have saved more. More people were drowning at sea…Success is not a word in humanitarian activity. Success is something else.’

His response: ‘If you are aware of a tragedy of human lives, you have to do something at once.’

I agree. That’s why MOAS Asia is at sea to explore the refugee situation, and share that information with local governments and aid organisations. If we see people in need, we will help them.

People say that solving the Rohingya refugee crisis is impossible. They may be right. But does that mean we shouldn’t try?